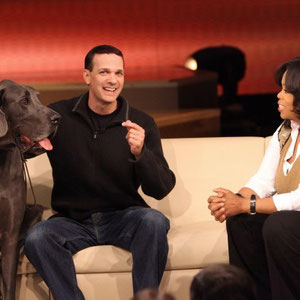 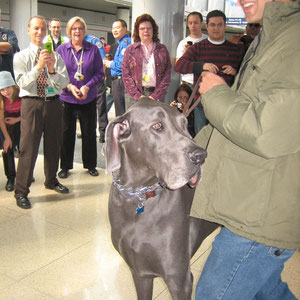 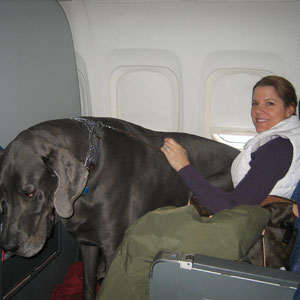 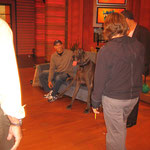 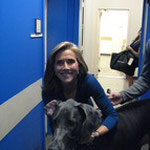 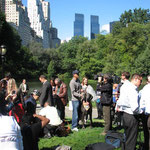 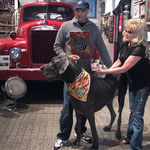 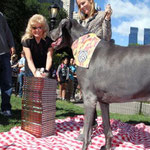 We are at the airport, not sure about this, but I know I've been here before. The sign in the waiting area says Chicago/New York. I heard someone saying something about the big apple. Sounds good to me, I like apples!  We made it to New York and the first thing the driver did was take us to Central Park. It was a long plane ride and I needed to ... you know.

Early in the morning we headed to the Regis and Kelly Show, where Guinness had arranged a few animals to appear on the show with me.  One little creature I won't forget was Boo Boo, the worlds smallest dog - boy was he small..  I also liked meeting Meredith Vieira, she was so nice..

Next stop was Central Park.  One big bathroom for me! We arrived to a bunch of people standing around with video and cameras.  Something about a press/media photo shoot to announce the launch of the Guinness Book of World Records release today staring me and Boo Boo!  We had lunch at the Guinness World Records office. Thanks Jamie, Sara, and the rest of the team for all your hospitality. Guess what they had in their conference room???   A life size cardboard image of me!  Our last stop of the day was the New York Fire Department museum for a more photos with Boo Boo.  We headed to Times Square for a quick personal photo, then back to Tucson.

Sorry for the low quality Youtube video, cut and paste the link below for high quality video from the Today Show.